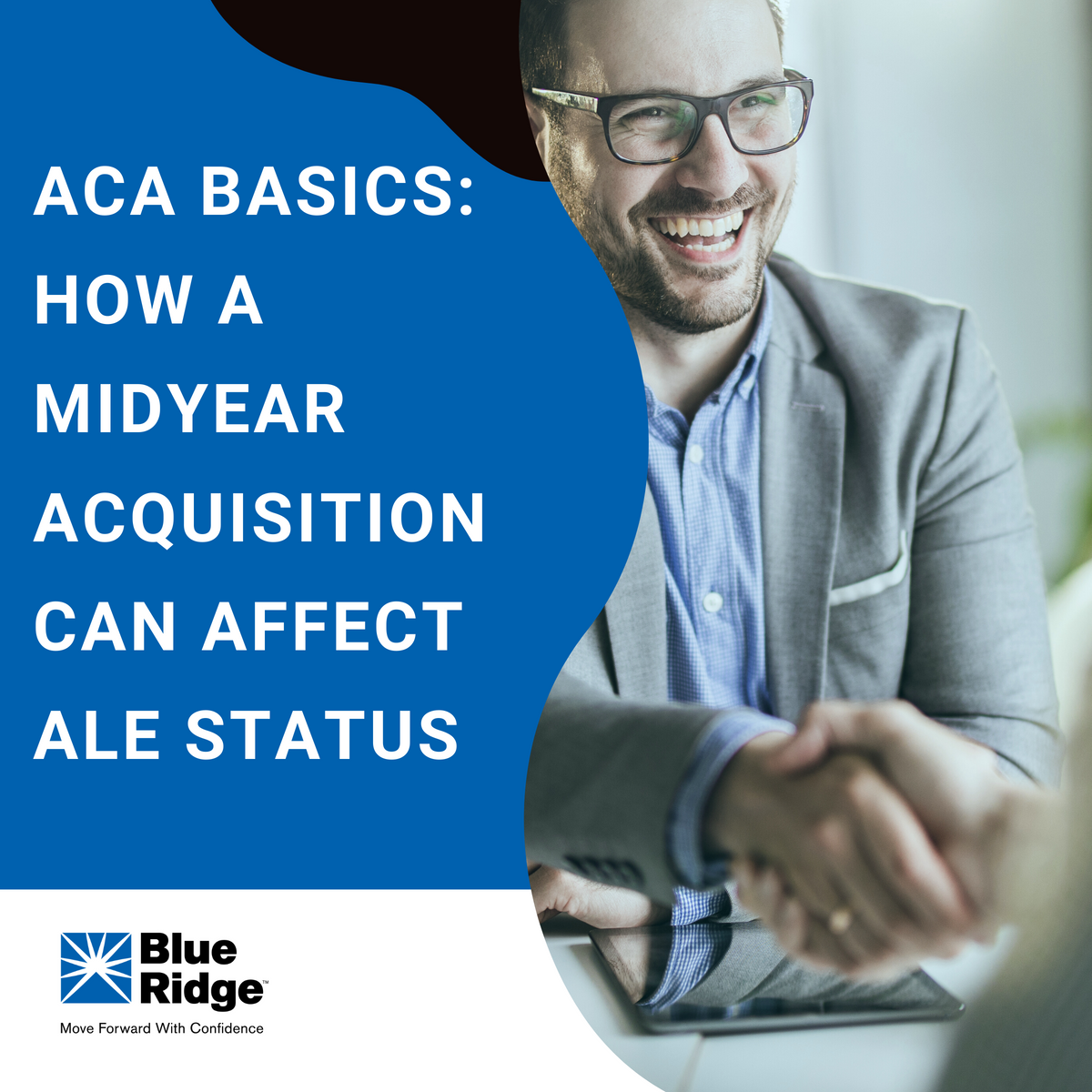 ACA Basics: How a Midyear Acquisition Can Affect ALE Status

More than 12 years after the Affordable Care Act (ACA) was signed into law, you and your advisers are likely familiar with the terms of being an applicable large employer (ALE).

In short, if you averaged 50 or more full-time employees (a number that includes part-time employees whose work hours add up to full-time equivalents) over the previous calendar year, you are considered an ALE for the current year. (For an in-depth examination of how ALE status is determined, visit the IRS website.)

This distinction is important because ALEs must meet minimum essential health coverage mandates and are subject to:

Assessing your number of employees over the previous year and determining whether you are an ALE is fairly straightforward. But what happens when you join with another organization that has a different ALE status?

Less clear, however, is what happens when a non-ALE acquires an ALE midyear. As noted by the ACA compliance company Accord, the IRS has yet to provide direct guidance on this type of midyear acquisition.

If you are a non-ALE acquiring an ALE, you could make either of the following assumptions:

The argument in favor of the first assumption is that you should follow the same guidelines for a non-ALE being acquired by an ALE. This would ensure that you are in compliance with ACA mandates. The drawback is that if ACA compliance isn’t necessary until the following January, you would be taking on extra administrative work and associated costs earlier than needed.

The second assumption could help you avoid those costs midyear. As noted by Accord, it is reasonable to believe that you would become an ALE on January 1 following the acquisition because ALE determinations are based on the previous year, when your company was not an ALE and had not yet acquired an ALE.

If you made new hires midyear and surpassed the average 50-employee threshold, you would not be considered an ALE until January 1 (when the ACA requires you to look back at this year). It is reasonable to believe that the IRS would view an acquisition in the same manner as new hires.

Work with your advisors

More than a decade since its inception, the ACA continues to raise compliance issues. Because questions remain about midyear acquisitions, it is imperative to document your reasoning to demonstrate a reasonable, good faith effort to comply with the ACA.

As always, seek counsel on ACA compliance. In this case, you should include your legal team before and during the acquisition process. They can work with you and the IRS to ensure proper adherence and avoid potential penalties.

If you have any other ACA questions or concerns, you should also talk with your insurance broker or benefits advisor. They can help you stay up to date on the latest rulings and guidance.