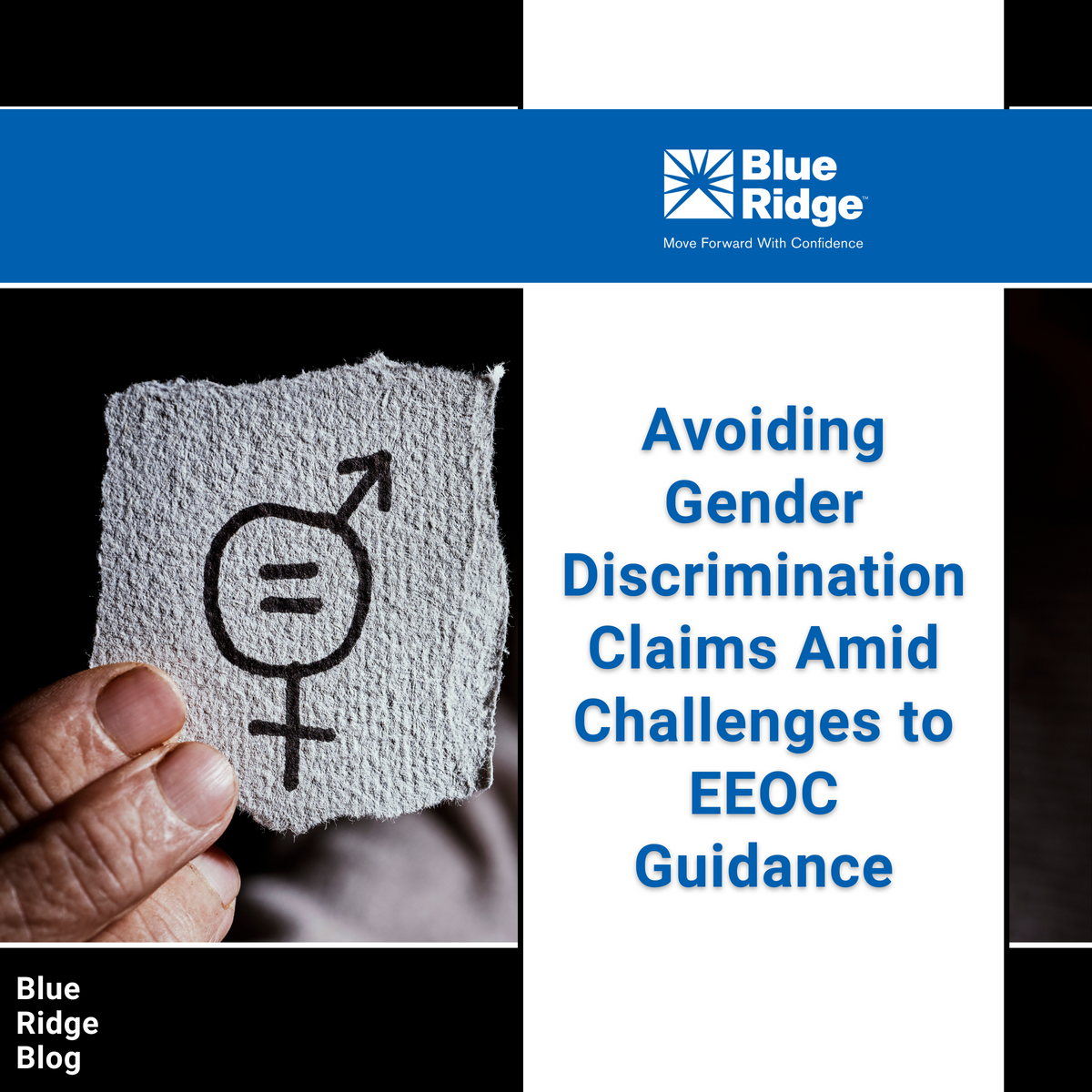 Protect Your Business from Gender Discrimination Claims Amid Challenges to EEOC

However, the lines around gender discrimination in the workplace are still far from clear.

In June 2021, the Equal Employment Opportunity Commission (EEOC) issued a technical assistance document (TAD). The TAD explains the EEOC’s legal positions on workplace discrimination on the basis of sexual orientation and gender discrimination.

Then, in October 2022, the District Court for the Northern District of Texas (Amarillo Division) ruled that the EEOC’s guidance was not lawful in Texas v. EEOC. The EEOC could appeal this ruling, but that doesn’t necessarily leave employers with a clear understanding of what to do right now.

To get a better handle on how to manage gender discrimination in the workplace, let’s take a look at:

What the EEOC tried to do

The EEOC’s TAD addressed some specific scenarios that could perpetuate a hostile work environment in violation of Title VII. For instance, it sought to answer questions about whether a transgender employee could be required to dress in a way that aligns with their assigned sex at birth, or whether an employer could deny an employee access to bathrooms, locker rooms and showers that correspond to their gender identity but not their sex at birth.

The EEOC concluded that:

The TAD also stated that an individual could have a case for unlawful harassment if they are subjected to severe or pervasive conduct based on their sex, including their gender identity, and a reasonable person would consider the conduct to be intimidating, hostile or offensive. It added that while the “accidental misuse of a transgender employee’s preferred name and pronouns does not violate Title VII, intentionally and repeatedly using the wrong name and pronouns to refer to a transgender employee could contribute to an unlawful hostile work environment.”

Legal challenges to the EEOC’s guidance

The state of Texas filed a request for the court to rule that the guidance was not lawful and enjoin the EEOC from enforcing or implementing it. In the state’s view, the EEOC’s guidance diverged from Title VII protections and what the court had outlined in Bostock v. Clayton County.

The court in Texas v. EEOC found that the court in Bostock v. Clayton County only determined that Title VII’s protected classes include the traits of gender identity and sexual orientation. This means that firing or taking other adverse employment action against someone for being gay or transgender amounts to a Title VII violation. However, the court found that Bostock v. Clayton County hadn’t decided whether specific conduct related to gender identity or sexual orientation was protected under federal law.

The court ruled that since the EEOC’s TAD explicitly stated that certain conduct related to pronouns, bathroom usage and dress codes was barred under Title VII, it had gone too far. It also found that the guidance constituted substantive, legislative rules that the EEOC was bound to promulgate through established, proper administrative procedures since. That’s because the TAD had issued mandatory language requiring employers to act in a certain way.

For instance, the TAD included language stating that the guidance didn’t have the force and effect of law and wasn’t meant to bind the public. But in response to a question about whether an employer could deny an employee’s equal use of a bathroom that corresponded to their gender identity, the EEOC guidance stated “no” and “broadly condemn[ed that] employment practice.”

Finally, the court stressed that in Bostock v. Clayton County, the court’s majority opinion left open the question of whether policies or procedures concerning sex-specific dress codes, pronouns, bathrooms, locker rooms and showers, as well as health care, might be unlawful. It noted the court’s majority opinion concluded that such issues should be left for future court cases.

Where do we go from here?

Regardless of what happens with the case against the EEOC, it’s important to recognize what the term “sex” in Title VII covers. In its ruling, the Bostock v. Clayton County court concluded that “sex” includes sexual orientation and gender identity, in addition to biological sex and pregnancy-related conditions. The EEOC’s updated “Know Your Rights: Workplace Discrimination is Illegal” poster, released in October 2022, provides guidance on sex discrimination in employment. (You must display this poster in a conspicuous location in your workplace.)

The EEOC also recently added the nonbinary “X” gender as an option for a complainant to select when filing a discrimination charge. And it modified its charge form to include “Mx” in the list of available prefix options, which EEOC Chair Charlotte Burrows says underscores the EEOC’s commitment to promoting greater inclusion for LGBTQ people.

While the Texas court has blocked the EEOC’s position for now, the EEOC remains focused on addressing sexual orientation and gender identity discrimination head-on. Therefore, it’s important to avoid treating employees in a disparate way based on their protected traits or enacting policies or procedures that have a disparate impact on such employees.

Train your workforce. Make it clear that discrimination based on sexual orientation or gender identity is unlawful. If someone is targeted for harassment, such as ridicule or bullying, based on their gender, they may pursue a hostile work environment claim. They may also have a valid retaliation claim if they are subjected to adverse employment action because of their discrimination claim.

Make sure your anti-harassment and bullying policy explicitly bars discrimination against people who identify as LGBTQ. Foster a culture of inclusivity where respect and belonging are championed.

Use gender-neutral wording (for example, they/them/their) and avoid gender stereotypes in your employee handbook, including dress code and grooming policies.

Recognize that different people identify with different pronouns (such as he/him/his, she/her/hers, they/them/their, ze/hir and ze/zir). Your workplace can either be a place of allyship or hostility, depending on how you and your employees respond. Make sure that requests addressed in a certain way are honored. (Human Rights Campaign, a nonprofit that works to end discrimination against LGBTQ people, provides a Glossary of Terms to help you understand how people in the workplace may identify.)

While the jury is out on whether the EEOC will be able to enforce its position, you still have some compliance obligations under the Occupational Safety and Health Act. This federal workplace safety law requires you to provide adequate bathroom facilities that are within a reasonable walking distance. If an employee who is transitioning from one gender to another is denied access to a restroom or must trek further than what is reasonable to use the facilities, you may face legal liability.

It's also a good idea to think about how you will respond if a nonbinary or transgender employee requests certain bathroom or locker room access. Consider how you’ll communicate with your employees if they express concerns over someone’s use of the facilities and whether you can offer a single, nongendered restroom so everyone has options.

Beyond federal laws, you may have to comply with state or local laws or regulations that permit employees to use the restroom that corresponds to their gender identity or expression. As a best practice, consult with a local labor and employment attorney who can explain the breadth of your compliance obligations.

By addressing issues like these, you’ll be in a better position to foster an inclusive environment and minimize the risk of complaints and lawsuits.

A note for religious organizations

If you are classified as a religious nonprofit or fold religious values into your businesses, there is another case pending review before the Fifth Circuit. In Bear Creek Bible Church & Braidwood Management v. EEOC, the District Court for the Northern District of Texas (Fort Worth Division) ruled such entities may be able to avoid Title VII liability concerning dress codes, grooming policies and restroom policies.

The EEOC may appeal this ruling and the ruling in Texas v. EEOC, so it’s imperative to seek legal counsel. They can help you understand your options and compliance obligations amid this uncertainty.

Blue Ridge Risk Partners is a top 75 independent insurance agency in the United States. With 22 offices and counting throughout Maryland, Pennsylvania, and West Virginia and access to hundreds of carriers, we are able to meet your unique insurance needs.