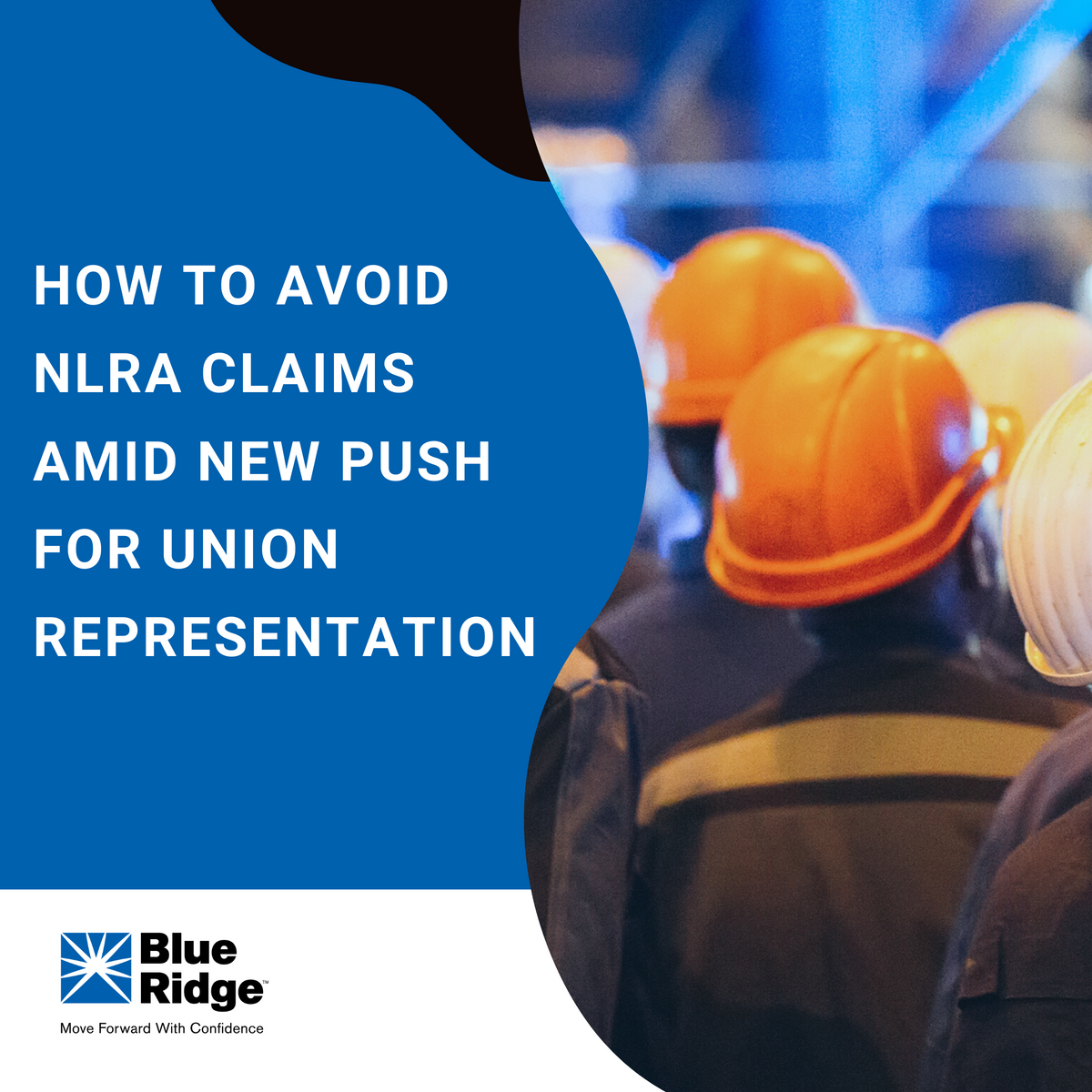 How To Avoid NLRA Claims Amid New Push for Union Representation Representation petitions, which employees, unions or employers may file to prompt a union election, are a hot topic right now.

Between October 1, 2021 and March 31, 2022, there was a 57% increase in the number of union representation petitions filed with the National Labor Relations Board (NLRB). And unfair labor practice charges were up close to 15%.

Efforts to unionize at major employers

Here are a few high-profile examples.

The Amazon Labor Union, comprising 6,000 current and former employees, wants the company to raise its minimum wage from $18 to $30 per hour and provide longer breaks and better benefits, according to CNBC.

Amazon is fighting to overturn the votes.

Starbucks has managed to operate as a union-free workplace for many years, but recently more than 30 of its locations nationwide have initiated unionization elections. Ever since, tensions with its workers have been growing.

Starbucks Workers United has accused Starbucks of engaging in union-busting practices, and now the NLRB has gotten involved. The NLRB has asked a court to issue an injunction ordering the immediate reinstatement of several Starbucks employees who it claims were retaliated against for being involved in union-organizing efforts.

The NLRB alleges Starbucks took swift retaliatory action against three of the four members of a union-organizing committee after learning of their protected activities under the National Labor Relations Act (NLRA). The adverse actions included discipline, suspension, actual and constructive discharge, the revocation of accommodations and placement on unpaid leave for one worker.

According to Cornele Overstreet, a regional director for the NLRB, “Employees have the fundamental right to choose whether or not they want to be represented by the union without restraint or coercion by their employer.”

Recently, the NLRB received a petition requesting to hold a union election at Apple’s Cumberland Mall retail store in Atlanta. The location employs more than 100 Apple workers. If the unionization effort succeeds, it will be the first-ever Apple store to unionize.

As unionization efforts like these continue to cause friction between workers and employers, employers should stay tuned to new developments. Here are a few more to keep on the radar.

A 1948 NLRB ruling gave employers the right to convene mandatory meetings with their employees to discuss their labor rights under federal law, including the right to refrain from forming a union.

But in a recent memorandum, Abruzzo said employers' ability to make employees attend these meetings is not consistent with the NLRA’s “protection of employees’ free choice” and constitutes a “misunderstanding of employers’ speech rights.”

Abruzzo’s memo urges the board to adopt an approach where employers would have to make employee attendance at these meetings truly voluntary.

Under state law, captive audience meetings have already been outlawed in Oregon, and Connecticut may soon become the second state to bar them.

While mandatory meetings are still lawful in most states, change may be coming. As a best practice, consult with a labor attorney before communicating with your workforce about union representation.

It could get easier for unions to organize without an election

The NLRA permits two ways for a union to organize:

Currently, if an employer has evidence that a union wants to organize at its workplace, it can insist on a secret (NLRB-overseen) ballot election. Through this process, an employer doesn’t have to accept a claim that the union has obtained a majority of signed union authorization cards.

But Abruzzo wants to change that. Abruzzo recently submitted a brief in Cemex Construction Materials Pacific LLC v. International Brotherhood of Teamsters urging the NLRB to reinstate the “Joy Silk” doctrine, which requires employers to recognize and bargain with a union if the union can present evidence of a card majority.

Under this doctrine, the NLRB could order an employer to establish a “good faith doubt” of the union’s majority status if it wants to reject a card majority.

If the board adopts Abruzzo’s position and reinstates the Joy Silk doctrine, employers will have to recognize unions based on signed employee authorization cards, rather than a formal vote.

Abruzzo recently issued another noteworthy memo concurring with a White House Task Force on Worker Organizing and Empowerment report. The report concluded that more federal interagency collaboration is necessary to guard against systemic abuses like discrimination, retaliation and other mistreatment in the workplace.

Employers can expect to see increased collaboration among the NLRB, the Department of Labor’s (DOL’s) Wage and Hour Division (WHD), the Equal Employment Opportunity Commission (EEOC), the Internal Revenue Service and other federal regulators.

Putting it all together

How all of these union-related developments will ultimately play out remains to be seen. But one thing is clear: They’ve thrust the issue of collective bargaining into the national spotlight. As an employer, now is a good time to re-familiarize yourself with your rights and obligations under the NLRA.

Under the NLRA, employers are barred “from interfering with, restraining, or coercing employees in the exercise of rights relating to organizing, forming, joining or assisting a labor organization for collective bargaining purposes, or from working together to improve terms and conditions of employment, or refraining from any such activity,” the NLRB notes.

Here are some key “don’ts” the NLRB outlines to help employers avoid getting ensnared in NLRA violations.

Finally, examine your wage and benefit offerings to make sure they are competitive. Wages have been cited as a key factor behind the unionization efforts at Amazon, Starbucks and Apple.