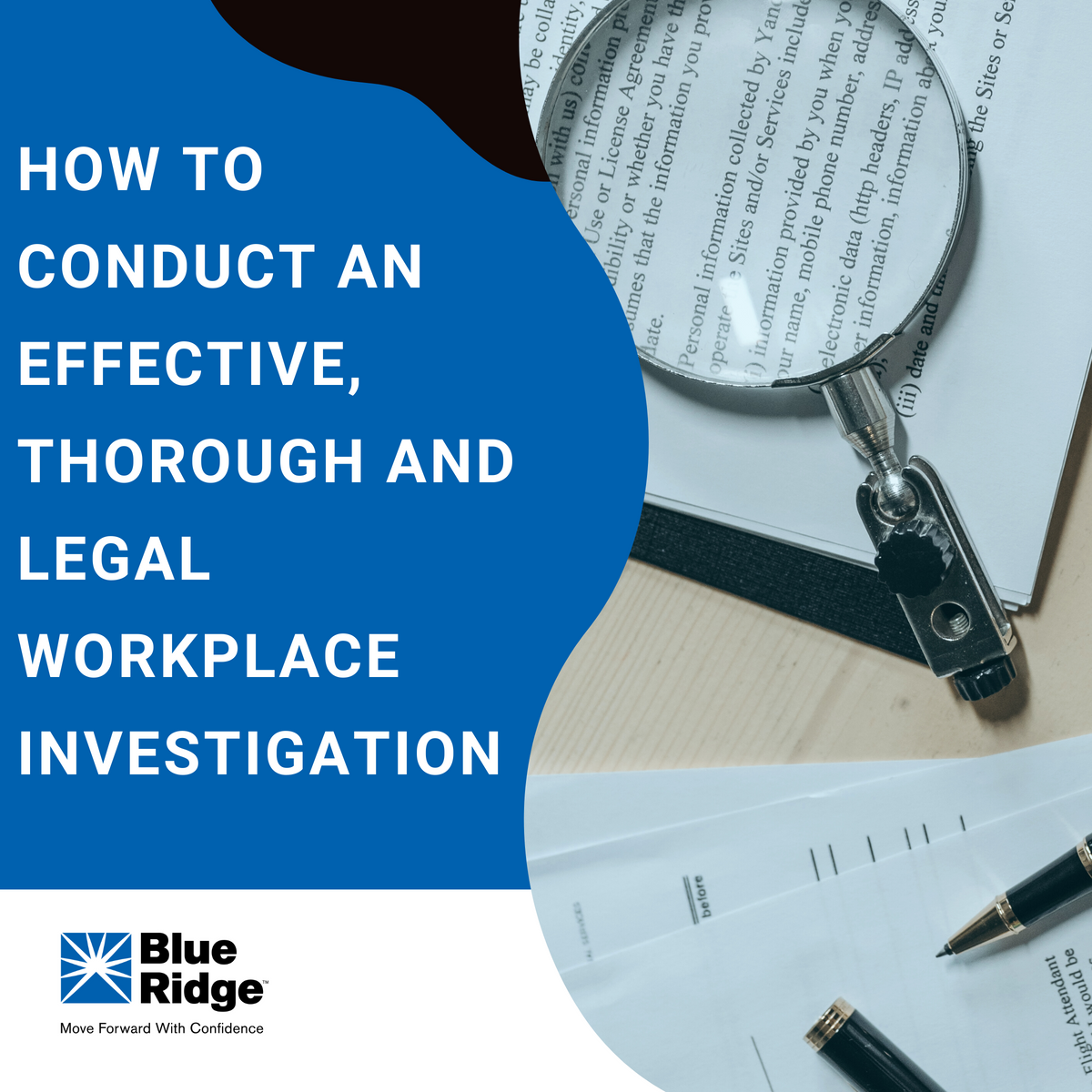 How To Conduct an Effective, Thorough and Legal Workplace Investigation An employee is accused of making inappropriate comments and groping a coworker. Someone complains that an employee has been siphoning the company’s inventory and selling it online. A supervisor allegedly speaks to their team members in an offensive, demeaning and bullying tone. These are just a few examples of when a workplace investigation may be in order.

While each case is different, it’s important to follow the same framework to ensure that all investigations are fair, thorough and legally compliant. When you successfully address the root cause of the issue and take appropriate corrective action, you minimize the risk of harm to the affected individuals and the business at large.

Read on to learn how to conduct an effective workplace investigation from complaint to closure.

Is an investigation really necessary?

Whenever an informal or formal complaint is raised or the employer otherwise learns of conduct that raises a red flag, an investigation is generally in order. Not investigating could expose the organization to liability if it knew or should have known about the situation but failed to adequately address it.

However, even in cases of egregious misconduct, the best course of action may be to suspend the employee with pay while you investigate the incident. And always consult with counsel as needed.

Whether the complaint is in writing or verbal, you’ll want to walk through the same steps to effectively address the concerns. But before you get to the actual investigation, there are a few things you need to know about how to respond to the initial complaint.

If someone asks whether the information they’re sharing will be kept confidential, let them know it may be shared with others on a need-to-know basis, but reassure them that the process will be conducted with discretion.

Separate the accuser from the accused, if necessary

If the allegation involves harassment or a hostile work environment, you may need to immediately separate the accuser from the accused. This could mean a schedule change or a transfer, but be careful not to do anything that could be construed as a penalty against either employee at this point.

For example, a complaint about workplace harassment is generally considered a legally protected activity. If the accuser is subjected to adverse employment action, such as an involuntary transfer, as a result of the accusation, they could have grounds for a retaliation claim. This is true even if the underlying harassment claim proves to be unfounded.

Start by asking who can take on the role without any actual or perceived bias. For instance, if the proposed investigator is friendly with the accuser or the accused, that could give the perception of bias.

Ask whether the investigator:

There are several places to look for an investigator, with the human resources (HR) department usually coming to mind first.

HR professionals generally are well-versed in labor and employment laws and possess strong interpersonal skills — they’re in the “people” business, after all. A representative from HR can be a sound choice so long as they don’t have a personal relationship with any of the parties involved.

If HR isn’t an option, an in-house attorney is also a sound choice. Or you can hire a third-party investigator. This can be a good choice if you don’t have someone with the right skills or there’s a risk of actual or perceived bias. If you decide to go with an outside investigator, have them work closely with HR as they conduct interviews and gather evidence.

Come up with a game plan

The witnesses and interview questions may change as the investigation evolves and uncovers new evidence, but it’s good to have a roadmap to start.

From complaint to closure, the length of an investigation can vary widely.

For instance, let’s say an employee complains that their coworker verbally harassed them. During the investigation, it’s discovered that this was the first time the accused had ever used any ill words against the accuser. The investigator also learns that the accuser, by their own admission, threw the first verbal punch and neither employee has a record of any type of workplace misconduct. Both employees realize the errors of their ways and vow not to engage in that type of behavior again.

The investigation would likely wrap up quickly in this case. But investigations aren’t always that cut and dried.

Let’s alter the facts and say that one of the employees has a history of verbal harassment and that one more infraction is grounds for their termination. They have denied the most recent allegation and claim there are multiple witnesses who can prove they were the victim of their coworker’s tirade. In this alternative scenario, the investigator would need to interview witnesses and evaluate their credibility to figure out what really happened.

Regardless of how much time you expect the investigation to take, follow a consistent framework. Responding to complaints in a uniform manner is key, since any complaint could become fuel for a future lawsuit against the organization. The Society for Human Resource Management suggests taking the following steps:

How to judge a witness’s credibility

In most cases, these factors will help the investigator make a sound judgment about the credibility of a witness.

A workplace investigation could easily come under scrutiny by a government agency, such as the Equal Employment Opportunity Commission (EEOC), a judge or a jury. Be sure you’ve meticulously followed all the steps in the process and that the final report is sufficient to defend the organization against any subsequent claims. If you look back on a workplace investigation and see missteps that could spark future liability, focus on correcting them for future investigations.

Remember that any documentation, including notes and emails, may later be discoverable if a lawsuit results; talk to counsel if you have questions about discoverability issues.

Inconsistency in the way interviews are conducted can easily land your organization in hot water. It’s hard to convince a fact-finder that an impartial investigation has taken place when the investigator asked alternative lines of questioning, coerced a witness into giving a desired answer or rendered their own opinions during an interview.

To avoid this, use the same interview strategies with all witnesses and ask open-ended questions.

A workplace investigation in action

Here’s an example of a workplace investigation cited by the EEOC:

An employee complains that their supervisor disciplined them more harshly than their colleagues because of their race. Title VII of the Civil Rights Act expressly prohibits discrimination on the basis of race. And the organization has a written policy stating that employees must be treated fairly, which means they cannot be singled out because of their race or any other protected trait when being subjected to an adverse employment action.

How should the organization respond? According to the EEOC, it’s critical to take the complaint seriously and investigate it so the alleged misconduct doesn’t continue to happen. Start by:

In this example, the disciplinary action to which the employee has been subjected should be amended. And if they would have received any pay, seniority or other benefits had they not been disciplined, those should be awarded, too.

The organization would then need to decide whether the manager who administered the disparate discipline should be disciplined and if so, how. From there, the organization should inform them about the investigation, the results and the basis for the action.

In addition, the EEOC says to document the results of the investigation and any corrective action taken.

A few more tips for an airtight workplace investigation

Now is a good time to review your workplace investigation policies and practices to ensure you are effectively handling employee complaints from intake to closure.

Ogletree Deakins notes that internal investigations often reveal “ongoing, large-scale, institutional” issues, which, if left unremedied, could open the organization up to increased legal risks and lower employee morale. Here are four proactive steps they recommend to ensure you are well prepared for an internal investigation:

One last piece of advice to keep in mind

If a workplace investigator ever feels in over their head or the investigation reveals systemic patterns of discriminatory or otherwise unlawful conduct, consider getting an attorney involved as soon as possible.

An attorney who is adept at workplace investigations can help you navigate any challenges while preserving privilege, where it applies, if the allegations also spark a lawsuit.